Frank Sinatra Has A Cold 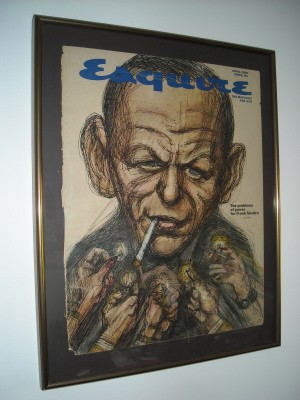 It’s an overstatement to call Gay Talese’s “Frank Sinatra Has A Cold” the greatest profile of all time. After all, there have been many wonderful profiles published since this ran in the April 1966 issue of Esquire. But it remains a sterling example of the form. When Talese arrived in Los Angeles, Sinatra was approaching 50, suffering from a cold (which meant he couldn’t perform or sing at his best & refused Talese’s requests to interview him. But Sinatra didn’t actively interfere with him — Talese talked to members of Sinatra’s family, many associates & employees as well as the inevitable hangers-on who surround celebrities. He was also able to observe Sinatra, in public settings where others were around, a few times. In a letter to Esquire editor Harold Hayes (alas, no relation), Talese wrote: “I may not get the piece we’d hoped for, the real Frank Sinatra, but perhaps, by not getting it — and by getting rejected constantly and by seeing his flunkies protecting his flanks — we will be getting close to the truth about the man.” It’s often forgotten today that the story was a sensation when it was published. In that pre-Internet time, “Frank Sinatra Has A Cold” was talked about across the country, especially because it revealed the legendary Sinatra — moody, sullen, petulant, arrogant, charming, sometimes all at the same time — in a way that wasn’t common in journalism at that time. It had an influence that a single magazine article could probably never have today. I found two copies of the April 1966 Esquire in a flea market years ago. I kept one but ripped the cover off the other to frame it. This is it, as it hangs on my office wall.