Sixty years ago this month, a 21-year-old Sylvia Plath started work at Mademoiselle magazine (at the time billed as a “quality magazine for smart young women”) as one of 20 junior guest editors assigned to the August college issue. 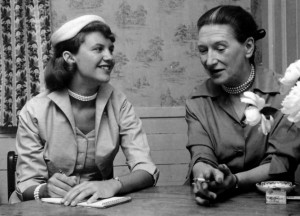 In Andrew Wilson’s Mad Girl’s Love Song: Sylvia Plath and Life Before Ted, published earlier this year, Wilson writes that as guest managing editor (she had wanted to be guest fiction editor), Plath took guilty pleasure in typing out rejection letters to several established authors and journalists, particularly one to a staff member of The New Yorker, the magazine that had repeatedly rejected her poetry. At one point, she was incensed because she’d missed a meeting Mademoiselle’s editor had set up with Welsh poet Dylan Thomas, with whom Plath was obsessed. (In the picture, she is interviewing Irish writer Elizabeth Bowen during one of Bowen’s lecture tours of the U.S.)  Plath already sounded disturbed in a letter to her brother when she wrote that after only a few weeks, she had witnessed the world splitting open before her eyes and it had “spilt out its guts like a cracked watermelon.” She fictionalized her experience at Mademoiselle in her 1963 novel The Bell Jar.  A few weeks after the book was published, Plath committed suicide. In 2001, Conde Nast killed Mademoiselle.