Every young writer finds a master to emulate, in the same way that  aspiring young guitarists obsessively study Eric Clapton, Ry Cooder or The Edge. What you recognize is a style that feels compatible with what you think you can achieve. While at journalism school in the late ’70s, I liked Tom Wolfe and Hunter S. Thompson as much as the next kid, but that would never be my style. Then I came across Gay Talese’s anthology of magazine features, Fame and Obscurity, first published in 1970.  The writing resonated with me. “I essentially write like a tailor,” he once said. “My idea as a writer is to make the stitching last. The writing, the shape of the story, the seriousness with which it is approached, the sense of craftsmanship…” 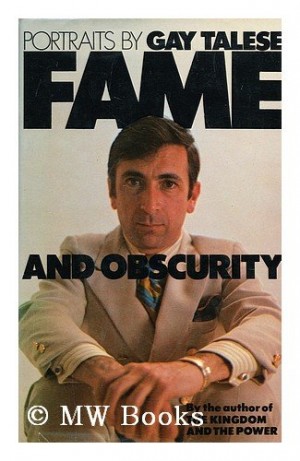 A reporter with The New York Times during the ’50s, he grew sick of the rigidity of newspapers and started writing for Esquire magazine in 1960. His first piece was a collage-like observation of odd bits and pieces about New York — the number of stray cats and a cat psychiatrist, the sharp-eyed gentleman who appraises skyscrapers and the divers who retrieve dead bodies…  It’s there, along with other essays about New York that formed his first book, New York – A Serendipter’s Journey. Also included is his second short book, The Bridge, a nearly-four-year reportorial project telling the complex story of the men who built New York’s Verrazano Bridge which connects Staten Island and Brooklyn.

The rest of Fame and Obscurity is a selection of profiles focusing on celebrities and those whose careers have fallen outside the spotlight. The most famous is “Frank Sinatra has a Cold,” which Vanity Fair‘s Frank DiGiacomo called “the greatest literary-nonfiction story of the 20th century.” As good as it is, though, to me it’s no better than his psychological studies of former boxing champs Joe Louis and Floyd Patterson, former baseball star Joe DiMaggio and actor Peter O’Toole.

His writing is elegant, almost formal. As a young writer, he revered fiction writers — F. Scott Fitzgerald, Irwin Shaw, John O’Hara. Once, while reading O’Hara’s short stories, I came across a scene that I realized Talese almost certainly took inspiration from for a scene in the Joe Louis profile. All of his features and books read like fiction yet they have been meticulously researched and reported, a practice Talese calls “the fine art of hanging out.”