I remember reading Adrian Nicole Leblanc’s stunning debut as a nonfiction author: “Random Family: Love, Drugs, Trouble and Coming of Age in the Bronx,” published in 2003 after she’d spent 1o years researching it. Being the 10th anniversary of the book, The New Yorker interviewed her about it earlier this year. Most writers will say that nothing is more important than your opening (to a book, article, query letter, any piece of writing of any kind). This is the opening para of “Random Family:”

“Jessica lived on Tremont Avenue, on one of the poorer blocks in a very poor section of the Bronx. She dressed even to go to the store. Chance was opportunity in the ghetto, and you had to be prepared for anything. She didn’t have much of a wardrobe, but she was resourceful with what she had—her sister’s Lee jeans, her best friend’s earrings, her mother’s T-shirts and perfume. Her appearance on the streets in her neighborhood usually caused a stir. A sixteen-year-old Puerto Rican girl with bright hazel eyes, a huge, inviting smile, and a voluptuous shape, she radiated intimacy wherever she went. You could be talking to her in the middle of the bustle of Tremont and feel as if lovers’ confidences were being exchanged beneath a tent of sheets. Guys in cars offered rides. Grown men got stupid. Women pursed their lips. Boys made promises they could not keep.” 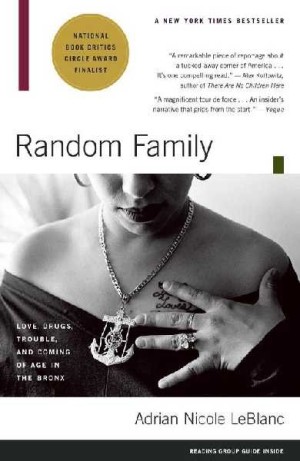 About this scene, and Jessica in general, Leblanc said: “I’d met Jessica in the courthouse and in one of her apartments, but my most vivid memory of my early time with her was on the street. We’d gone to visit Boy George at the Metropolitan Correctional Center, where she had charmed her way through the relentless intake process, and she and I shared a meal in Little Italy afterwards—courtesy of the restaurant. This struck me then—as it does now—as significant: a free meal offered by a Little Italy tourist trap. Men offered her whatever they had on hand—food, compliments, invitations, promises. She was a knockout and she knew how to deploy her beauty; part of the deployment was sharing her pleasure in it.”

But, Leblanc went on, this isn’t why she opened the book with this scene. “I had tried all sorts of openings. They lacked this immediacy. I rewrote the opening of the book at least 45 times. It felt as if 60 to 75 per cent of the time writing the book went to those first 25 pages. The relationships were so complex, and, depending on how old Jessica was, a certain number of facts had to be explained. Some of those terms weren’t easy to state without lengthy explanation. How to get the reader up to speed for the story? Finally, my editor and I decided to simply dive in from the place of understanding where I’d landed after ten years and hope the reader would be engaged enough by Jessica’s extraordinary charisma that they’d want to catch up to whatever initially might confuse them.”