The great actor, Peter O’Toole, died last Saturday (December 14th). Fifty years ago, he spent the better part of a month in the company of Gay Talese, considered among the greatest narrative nonfiction writers, for an Esquire profile published in August 1963 [see link below]. The piece opens on a plane from London to Ireland, with O’Toole setting the tone for what becomes a merry tale filled with bawdy O’Toole-isms. After a flight attendant brings O’Toole a scotch (his first of many), Talese writes: “’Oh, look at that ass,’ O’Toole said softly, shaking his head, raising his eyes with approval. ‘That ass is covered with tweed made in Connnemara, where I was born… Nicest asses in the world, Ireland. Irish-women still are carrying water on their heads and carrying their husbands home from pubs, and such things are the greatest posture builders in the world.’” 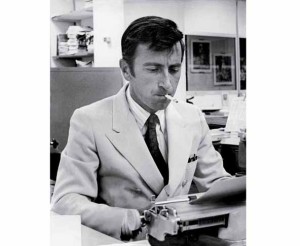 O’Toole on the plane is a classic scene, a narrative technique at which Talese excelled. At a Nieman Foundation speakers’ series in 2011, Talese talked about scenes. “I’d read John Cheever and John O’Hara and Irwin Shaw – my favorite writer – and I started reading F. Scott Fitzgerald stories, Hemingway stories, Carson McCullers stories, and I started thinking, Why can’t I write a magazine piece like a short story, without changing the names…?

Practicing what Talese calls “the fine art of hanging out” for this assignment,” O’Toole proved to be a formidable profile subject, bobbing and weaving around the writer on pub crawls in Dublin, to the horse races at Punchestown racecourse and to the rural countryside of Glendalough, where his ancestors were buried and where he walked as a child. O’Toole is always at some stage of drunkenness, and although Talese has said his time with the actor was the most fun he’d had on a story, I also sense it was all he could to keep up with O’Toole’s hilarious and seemingly non-stop blarney. As a profile, “Peter O’Toole on the Ould Sod” is less majestic than other Talese portraits of that era, like those of Frank Sinatra or the boxers Joe Louis and Floyd Patterson, but it still shows a master at the top of his game.