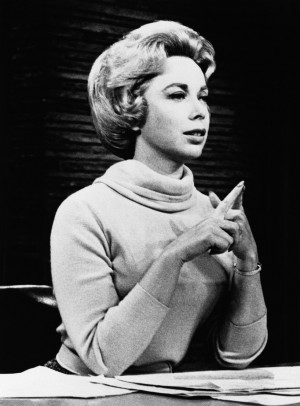 In a lovely essay about the late Joyce Brothers in The New York Times Magazine in December, writer Kim Tingley reconstructed a memorable moment in the life of the psychologist best known for counseling on her own syndicated radio and TV shows. On January 4, 1971, Brothers took a call from a woman who said she was in the process of committing suicide by taking sleeping pills. That day, Tingley writes, “Dr. Joyce Brothers sipped a cup of coffee with heavy cream and sugar, read several newspapers, applied makeup, coiffed her blond bob and took a cab to the studios of the radio station WMCA, just south of Central Park, for her daily call-in show. Meanwhile, 30 miles east, in Bethpage, on Long Island, a middle-aged special-education teacher quarreled with her husband. He told her he wanted her to kill herself and walked out; she gathered sleeping pills and, sobbing, dialed the telephone — as Brothers settled in behind her mike and slipped on her headset…”

Tingley is a science and environment writer who has been published in OnEarth, The New York Times Magazine and The New Yorker, and won the prestigious Rona Jaffe Foundation Writers’ Award in 2012. She told me that Brothers’ daughter said her mother would have followed that routine on the morning of the 4th, as she did every day before going off to work.

“At 9 a.m. on the 4th,” Tingley continued, “alone in a soundproof studio, Brothers punched a button on a Western Electric call director and told the Bethpage teacher she was on the air. A window separated Brothers from the control booth, where a producer answered the phone, holding up fingers to signal which line she should take. As she listened to callers, she would stare down at the desktop with such focus that a red light had to be installed there so that producers could flash it to get her attention…”

That is the heart of a good reconstruction. Finding every word that may have been written about a profile subject or incident as well as locating people who were there and can contribute eyewitness memories. For the story of the woman’s fight with her husband and taking the pills, Tingley relied on news reports in The New York Times and Associated Press as well as an interview she conducted with the Times reporter, who was still alive. She also interviewed two WMCA producers — one referred to her by Brothers’ daughter and another she found on a New York City radio message board — who remembered various details about Brothers as a host (for example, the flashing red light) and about this dramatic incident.

Back to the story: “That voice — interested, gentle, familiar; a small, cool hand on the forehead” kept the woman on the air for more than three hours while police traced the call and sent officers to her home. “One young producer who watched Brothers at work remembers the concentration on her face; she never looked up. Another, who heard the show at his cubicle, remembers how calm she sounded…”

One obvious tool for a reconstruction like this one would be a tape of the show. There is a large collection of Brothers’ tapes, papers and other memorabilia at Cornell University but most of it hasn’t been indexed yet and Tingley couldn’t find it in the New York radio archives at The Paley Center for Media either. WMCA is under new ownership but both the former, as well as current, owners confirmed they never made a habit of keeping tapes. No matter; Tingley crafted a detailed and engrossing narrative about a moment in Brothers’ life more than four decades ago.