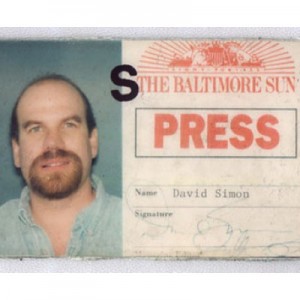 In 1991, Baltimore Sun reporter David Simon published a best-selling nonfiction book, Homicide: A Year on the Killing Streets, about 12 months he spent with detectives from the Baltimore Police Department’s Homicide Unit. Hollywood director Barry Levinson turned it into a TV series, Homicide: Life on the Street, and eventually Simon quit his reporting job to write episodes for the series. Of course, Simon went on to create the legendary HBO series, The Wire and Treme, but back in 1997 he wrote a funny piece in The New Republic about shooting the Homicide series. Here he describes rounding up some of the real drug-dealing kids he knew from his reporting days to appear in the series:

The day this scene was shot was not without its peculiar charm.
“You all want to be in a TV show?”
“Which one?” asked Boo.
“ ‘Homicide.’ The cop show.”
“What do we have to do?”
“Sling drugs on a corner and get chased by the police.”
They looked at each other for a long moment. Then laughter broke on the Southwest Baltimore crossroads of Gilmor and McHenry. Tae, Dinky, Manny Man, DeAndre, R.C.—all of them were willing to leave their real corner untended for a day, travel across town and playact for the National Broadcasting Corporation. Only Boo was unsure.
“How much we gonna get paid?” he asked.
“You’ll be non-union extras,” I told him. ‘That means about $45 for the day. ”
“Sheeeet,” drawled Boo.
Forty-five dollars was fifteen minutes’ work at McHenry and Gilmor. I knew this because, at that point, I had been around Tae and Dinky and the others for about ten months, and, for most of that time, they had sold drugs. I, in turn, had watched them sell drugs.
Boo stayed on the corner that day, slinging blue-topped vials of coke. The rest followed Tae across town to the Perkins Homes, a squat stretch of public housing that would serve as the pretend drug market. They filled out tax forms, waited out the inevitable delays and were eventually escorted by an assistant director to a battered side street. There, on die set, a props man handed them pretend drugs and pretend weapons, and the director, a very earnest white man, arranged them on the street in the manner most pleasing to the camera.
They filmed the scene over and over, with the director covering it from a variety of angles and distances. Each time, the pretend lookout shouted his warning. Each time, the corner boys ran from the approaching radio car. Each time, they were penned in the same alley, forced to the ground and given the handcuffs.
After the eighth or ninth take, the boys began to rebel.
“I’m sayin’ this is bullshit,” muttered Dinky. “They got all of us dirty like this. Dave, man, you know it wouldn’t be that way. You know we don’t do it like that.”
It was true. The props department had stuffed fake drugs and guns and knives into the pockets of all the extras. Every last one of them would be caught holding, every last one would, in the make—believe world, take a charge. At Gilmor and McHenry, it was very different. The boys worked ground stashes, handling only a vial or two at a time. They kept the guns in rowhouse vestibules or atop the tires of parked cars. They didn’t run at the ?rst sign of a police car. They didn’t have to run.
During the twelfth take, the boy playing the lookout sounded his alarm as he had the first eleven times, but this time, the other boys didn’t play along. A few of them hesitated long enough to toss their fake vials and fake baggies into the gutter, as they would have in the event of real cops raiding their real corner. Tae dicln’t even bother to run. He stayed in the doorway of a vacant rowhouse, watching the police car roll past with a practiced indifference.
“Cut,” cried the director.
The second assistant director came running over. “What’s up, guys? Why aren’t you staying with the program?”
“We don’t do it like this,” DeAndre told him.
“How do you mean?”
DeAndre tried to explain. So did Dinky. The second A.D. was sympathetic, but only in the real world can God exist in the details.
“It’s  just television, guys. I hear what you’re saying, but do it like we talked about, okay?”
With some reluctance, the boys agreed.
“Damn,” said Manny Man, walking back to his position. “This ain’t gonna look right. People in other cities gonna see this show and think the crews in Baltimore don’t know how to carry it…”