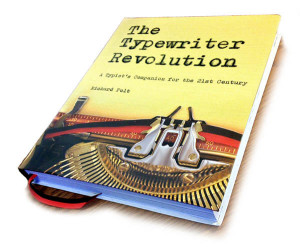 Like every technology throughout history, the typewriter had its revolutionary moment when it was a paradigm-shifting device, communicating ideas faster and more efficiently than anything previously imagined. Although there were many mechanical writing devices before it, the revolution really began with the Sholes & Glidden Type Writer (Christopher L. Sholes also invented the QWERTY keyboard, still used today), which began commercial production in 1873. Today, despite smartphones and tablets and laptop computers, typewriters retain a romantic allure, for various reasons explored in Richard Polt’s new book The Typewriter Revolution: A Typist’s Companion for the 21st Century. 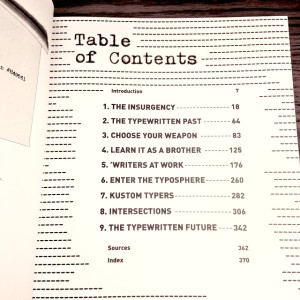 Polt is the creator and webmaster of The Classic Typewriter Page (http://site.xavier.edu/polt/typewriters/) and the blog Typewriter Revolution (http://writingball.blogspot.ca/), as well as teaching philosophy at Cincinnati’s Xavier University (although that might seem to be a sideline given his passion for typewriters). His book covers just about every aspect of the subject imaginable, from its history to a service guide to buying and caring for a typewriter to electronic gadgetry (USB typewriters, digital simulations) to the typewriter as a tool of activists advocating “slow communication” or organizing type-ins at hackerspaces and its fantastical place in the steampunk subculture. Polt also details the typewriter in movies, music videos and fashion and talks about the writers who favor typewriters over computers. And includes many, many lovely images of typewriters and typewriter paraphernalia.

Polt is a member of the “typosphere” — a small domain of folks who upload images of typed pages to their blogs (see Polt’s own Typewriter Revolution) — and there is a strong political theme running through his book. As he writes in his introduction, the spirit of The Typewriter Revolution “defiantly resists technological conformity, the totalitarian, information-processing world view, and the destructive assumption that all human activity should be judged by the test of efficiency. These threats are real, and a typewriter is a weapon against them.” (I was reminded of the words painted on Woody Guthrie’s guitar: “This machine kills fascists.”) Not everyone will be sold on the message — and I admit I lean more toward the nostalgia end of the spectrum — but anyone interested in one of the most significant inventions of the Industrial Revolution, whose influence is still seen today in our digital world, should read this book.