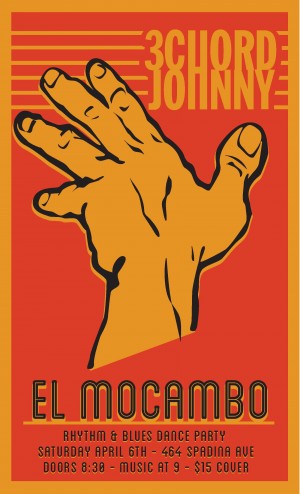 The journalists’ (plus ringers) band in which I play will be at the El Mocambo in Toronto on Saturday, April 6th. You could say we’re a bit like the Toronto version of The Rock Bottom Remainders, that U.S. writers’ band. (Except we’re not as famous or as wealthy as Stephen King, Matt Groening, Dave Barry, Amy Tan and the rest.) But we are all about the days when people played music not for glory or for groupies or for riches, but just for fun. We all have day jobs and a few of us are even somewhat well-known here in Canada for what we do when not playing music.

We play blues, R&B and soul characteristic of the music played by The Rolling Stones circa 1963-64 (thankfully, for audience and band members alike, pre-Spandex tights and baby tees). We are often joined by notable guests — people who really are professional musicians, like organist/guitarist Vezi Tayyeb, sax player Sean O’Connor and singer/songwriter Cindy Church — who are always amazed that the members of 3 Chord Johnny know more than three chords. (We know five, and are working on a sixth.)