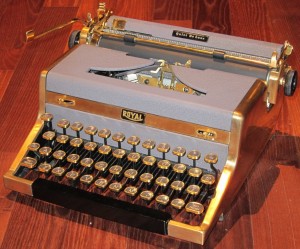 The Royal Quiet DeLuxe had been around for awhile and earned a reputation for easy typing & rugged durabilty. Then, in the mid-’40s, Royal commissioned legendary industrial designer Henry Drefuss (famous for the Westclox Big Ben alarm clock and later for designing the Princess Phone for AT&T and the Polaroid SX-70 Land Camera) to update its flagship typewriter. He went for a more modern style and, in 1947, Royal launched a gold-plated version in limited quantities. British novelist Ian Fleming, who wrote the James Bond novels, used one. The gorgeous turquoise model was made in the ’50s (in case you couldn’t guess) and was available in a variety of glossy, frothy colours. While in Calgary earlier this year, I met Janine Vangool, editor of the magazine, Uppercase, at her studio/shop. She’s the author of the soon-to-be-published The Typewriter: A Graphic History of The Beloved Machine, and had a collection of these vintage Royal Quiet DeLuxes.