My friend and colleague, Lisa Bendall, a talented writer and editor, first typed on her dad’s Hermes 3000.  (On her web site there is a sweet picture of her, at seven, using it: http://www.lisabendall.com/about_lisa.html.)  Introduced in 1958 by the Swiss manufacturer, E. Paillard & Company, it soon had a reputation for being a reliable, durable and lovely machine. As a report on the mytypewriter.com site put it, the Hermes 3000 was among “the most sophisticated manual portables ever made.” Unlike most portables of the era, it had many features you’d find on an office model, not to mention the graceful curves and those large buttons (reminiscent of the big buttons found on the dashboards of cars in the ’50s and ’60s. It became known as the perfect portable for writers and executives alike. 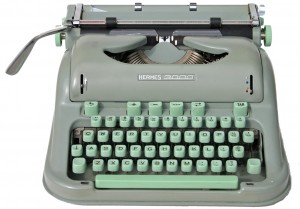 It was Jack Kerouac’s last typewriter. Lonesome Dove author Larry McMurtry uses one (in 2006, he kissed it after winning a Golden Globe for co-writing the screenplay for Brokeback Mountain). Matt Groening, creator of The Simpsons, also uses one and the British journalist and broadcaster, Caitlin Moran, appeared on the cover of her 2012 book, Moranthology, with her Hermes 3000.

I have a Hermes Baby, in automotive terms a “subcompact” version of the 3000. Same colour as this one, though, that emblematic mint green — which some call seafoam green… that seems a tad frothy to me, although accurate. 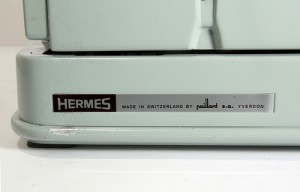