Daphne du Maurier at her Underwood

British novelist Daphne du Maurier was one of five “Women of Achievement” selected for a set of British stamps issued in August 1996. The image included her portable Underwood typewriter,

I’ve never read her but certainly know her reputation, especially because many of her works have been adapted into films, including the suspense novel Rebecca (directed by Alfred Hitchcock and winner of Best Picture Oscar in 1941) as well as her short stories The Birds (also Hitchcock) and Don’t Look Now (Nicolas Roeg). She married (unhappily), had an affair with Gertrude Lawrence and an unrequited passion for Ellen Doubleday, wife of the publishing magnate. She once said that she loved nothing more than working in the gardener’s shed she had 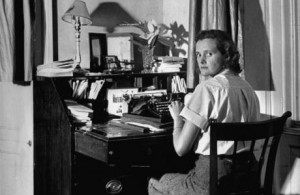 roughly converted into an office: “I’d sit for hours on end, chain-smoking, chewing mints and tapping away at my typewriter.” 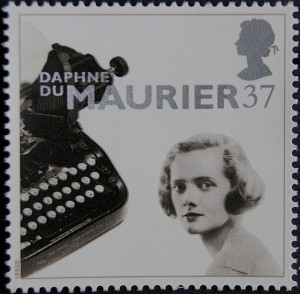