“The ocean at night is a terrible dream. There is nothing beyond the water except the profound discouragement of the sky, every black wave another singular misfortune. Walt Marino has been floating on his back for hours, the ocean on his skin, his mouth, soaking the curls of his graying hair…” 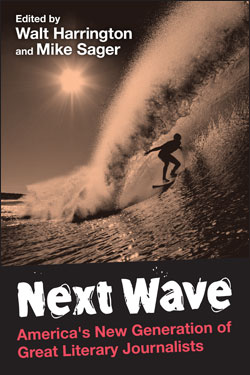 Whew. Those are the opening sentences of Justin Heckeft’s powerful and poetic feature, “Lost in the Waves,” published in Men’s Journal. It’s the story of a father and his 12-year-old austic son who went for a swim, were swept out to sea by a riptide and struggle to stay alive

It’s one of many fine stories collected by award winning writers Walt Harrington & Mike Sager, co-editors of a terrific new anthology of literary journalism called: Next Wave: America’s New Generation of Great Literary Journalists. While some of the sources for these stories are expected (Esquire, Rolling Stone, The New Yorker, Vanity Fair), others are not (Atlanta magazine, ESPN the Magazine, Denver’s 5280 magazine and, of course, Men’s Journal).

The idea was to showcase young talent — writers who were, as of 2011 when the book was assembled, under 40. Writers who build on the foundation of half a century of literary nonfiction by the likes of Joseph Mitchell, John Hersey, Lillian Ross, John McPhee, Gay Talese, Joan Didion, Tom Wolfe, Tracy Kidder, Susan Orlean and Ted Conover.

Another highlight is Canadian Chris Jones’ beautifully reported and written profile, “Roger Ebert: The Essential Man,” published in Esquire before Ebert died earlier this year. Ebert had an extraordinary courage and what we sometimes call “life force,” which Jones captures. Less literary, but no less powerful, is Pamela Colloff’s “Hannah and Andrew,” which ran in Texas Monthly. It’s a straightforward, but expertly reported and riveting, investigation into the story of a young mother convicted of murder in the death of her 4-year-old (of salt poisoning, of all things!) & imprisoned. It questions the assumption everyone, from investigators to the media to citizens, had that the woman is a heartless baby-murderer.

It’s also interested that’s it’s not published by a mainstream publisher. Instead, Mike Sager used his own money to finance The Sager Group, which he describes as “a multi-media artists’ and writers’ consortium with the intent of empowering those who make art…”  (Writers are paid royalties from the sale of ebooks and print-on-demand books.) That’s part of the “next wave” as well.