Seven years ago this month, the great Polish journalist, Ryszard Kapuściński, died of a heart attack at 74.  I first came across Kapuściński when I read his remarkable book, Another Day of Life, an account of three months he spent immersed in the Angolan Civil War in 1975: 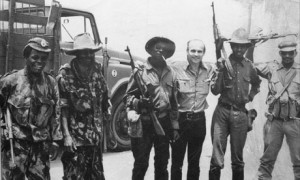 “The whole Trivoli Hotel was packed to the transoms and resembled our train stations right after the war:  jammed with people by turns excited and apathetic, with stacks of shabby bundles tied together with string. It smelled bad everywhere, sour, and a sticky, choking sultriness filled the building. People were sweating from heat and from fear. There was an apocalyptic mood, an expectation of destruction. Somebody brought word that they were going to bomb the city in the night. Somebody else had learned that in their quarters the blacks were sharpening knifes and wanted to try them on Portuguese throats. The uprising was to explode at any moment…”

He described his craft as “literary reportage,” but U.S. author and critic Adam Hochschild, in a play on the South American literary genre, magic realism, called it “magic journalism.” Like the early years of The New Journalism in the 1960s, Kapuściński pushed boundaries, was less concerned with conventional fact-gathering than the allegorical narratives that filled books which were, more or less, everything that wouldn’t be found in standard news reports, including the ones he wrote himself for the Polish Press Agency. He kept two notebooks: one for the news reporting and the other filled with his impressionistic observations which became books on Ethiopia’s ruler, Haile Selassie; the Iranian Revolution; the former Soviet Union; Latin America. Today, Kapuściński’s reputation is surrounded by controversy—charges of inaccuracies, sloppy reporting. (He once said, “I’m not writing so the details add up—the point is the essence of the matter.”) So I read him and accept that I’m getting a truth that may lie beyond factuality. As Salman Rushdie wrote in The Times of London, Kapuściński’s writing is “always wonderfully concrete and observant, conjures marvels of meaning out of minutiae.”

Click on this link to see a trailer for an upcoming animated feature (a Polish-Spanish-German-Belgian co-production) of  Kapuściński’s Another Day of Life: