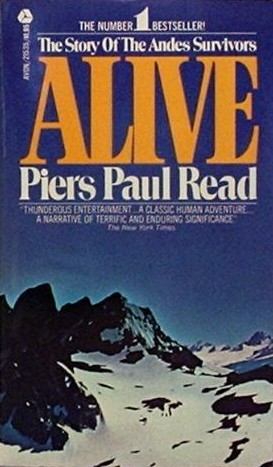 Forty years ago, Piers Paul Read’s landmark work of nonfiction, Alive: The Story of the Andes Survivors, was published. It’s the story of  Uruguayan Air Force Flight 571, a chartered plane carrying 45 people — the Uruguayan rugby team along with family members,  friends and a five-man crew — that crashed in the Andes in October 1972. A quarter of the passengers died in the crash and several others succumbed to injuries or sub-zero temperatures within days. Of the 27 still alive, another eight were killed by an avalanche a few weeks later. The final 16 survivors, faced with certain death and fighting moral and religious inhibitions, ate the flesh of their deceased friends until they were rescued in December, more than two months after the crash.

The media loved the sensationalism of the story — cannibalism sells! — as much as the survivors did not. When a number of wealthy publishers bid for the chance to publish a book-length account, dangling famous nonfiction authors as bait, to everyone’s surprise the survivors chose a relatively small publishing house, J. B. Lippincott, and a virtually unknown young British novelist who spoke no Spanish. Reid later explained that the rugby players, young themselves, liked the fact that he was around their age; was English rather than American; and that, like them, he was a Roman Catholic, imagining that his Catholicism meant he would take a more measured, contemplative approach.

Reid interviewed the survivors and their families as well as the families of those who had perished. He found the process difficult, sometimes painful. Many, who had not wanted to talk to parents, priests or therapists, unburdened themselves to the writer. His immersion in their stories led some of them to begin referring to Reid as “the 17th survivor.”

Reid’s reconstruction vividly captured the immediacy of the disaster and the terrifying prospect of death. “The dim light grew dimmer still; a few drifted into half-sleep, and their breathing took on a more regular pattern which in its turn lulled others to sleep. Canessa remained awake, trying to communicate telepathically with his mother in Montevideo. He held a strong image of her in his mind and repeated over and over again in emphatic whispers, which were inaudible to the others, ‘Mama I am alive, I am alive, I am alive…'”

But when, as agreed, the survivors were shown the manuscript, they were shocked. While it was balanced and sensitive, conveying the heroism and courage required to overcome the despair of feeling they would never be rescued, Reid also described human beings who at times quarrelled and behaved selfishly. Most significantly, he included the gruesome details of their survival: eating human flesh. Convinced they would be seen as savages and hated for their transgression, not all the survivors were convinced when Reid explained that readers needed to know the truth and judge for themselves. When the book was published in spring 1974, the details remained, thanks in part to the bond Reid had formed with his subjects as well as to a clause in the contract giving the author control over the final version.

Alive would sell more than 5-million copies worldwide and, contrary to their fears, the survivors became national heroes. A film, starring John Malkovich and Ethan Hawke, was released in 1992. Read, who lives in London and has had a successful career as a writer of both fiction and nonfiction, was sometimes accused, although never convicted, of having embellished, or even made up, some of the narrative in Alive. As he wrote in his acknowledgments, “at times I was tempted to fictionalize certain parts of the story because that might have added to their dramatic impact, but in the end I decided that the bare facts were sufficient to sustain the narrative.”