The Art of Nonfiction on the Bridge 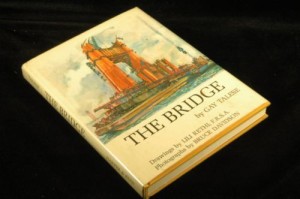 “Chrissake, Joe, let’s get the bolts out and put that mother on,” one pusher yelled to Joe Jacklets, who was being cautious with the casting.
The pusher, noticing that another gang working down the catwalk had already removed the bolts and were clamping the casting into place, was getting nervous–his gang was behind.
“Take it easy,” Joe Jacklets said, “this thing might not hold.”
“It’ll hold.”
So Jacklets removed the last bolt of the two-section casting and, as soon as he did, one half of the casting–weighing one thousand pounds–toppled off the cable and fell from the bridge.
“Jes-sus!”
“Ohhhhhhh.”
“Kee-rist.”
“Noooooooooo!”
“Jes-SUS.” 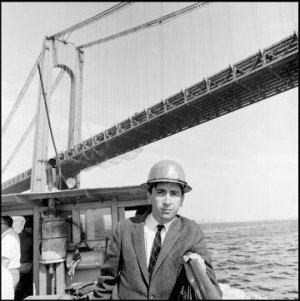 In mid-November, 1964, Gay Talese’s book, The Bridge, was published. Not yet acknowledged as one of the pioneers of literary journalism, Talese, a young New York Times reporter, documented the making of the Verrazano-Narrows Bridge, from dramatic scenes of workers balancing on steel beams 700 feet high to the backroom maneuvering that led to entire neighbourhoods on both the Brooklyn and Staten Island sides disappearing. This month, a new edition has been released by Bloomsbury – with an afterword by Talese, new architectural drawings and Bruce Davidson’s photos from the first edition – timed to the 50th anniversary of the official opening of the bridge. (Still an engineering marvel at 2.5 miles, it’s the longest suspension bridge in North America and the sixth largest in the world.)
Talese’s main interest were the 10,000 ironworkers on the bridge, the Mohawks, mainly Canadians, off reserves, midwestern boys off farms, Newfoundlanders. Three men fell to their death. All the while, Talese, who coined the term “the fine art of hanging out,” hung out. Lamenting how rare it is today for writers to do this kind of “saturation reporting,” Talese recently told a reporter for the New York Observer, “I do not insert myself into their stories, but I do insert myself into their lives. But to do that you have to take the time… Reporters are not as much allowed that anymore.”