Norman Sims on The Literary Journalists 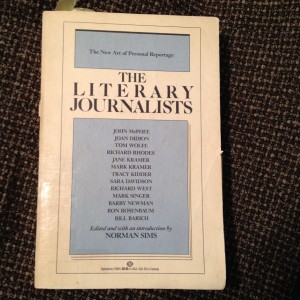 Here’s a picture of my distressed, patched, Post-it noted, highlighted and annotated copy of The Literary Journalists, which I bought in 1984, the year it was published. The anthology, subtitled “The New Art of Personal Reportage,” contained great works of nonfiction by John McPhee, Tracy Kidder, Joan Didion, Tom Wolfe and nine others. Edited by my colleague and friend, Norman Sims (http://normansims.com/), his term more-or-less officially re-named what Wolfe had dubbed “The New Journalism” a decade earlier. (Both revived terms used to describe nonfiction writing in the late 19th and early 20th centuries.)  It also included an introduction, written by Norm, which was like a manifesto for this genre.

“When I was working on The Literary Journalists in the early 1980s, I don’t recall seeing any other names for this kind of writing, other than Tom Wolfe’s New Journalism. But by the ’80s even he had stopped using it and younger writers were not imitating something done in the ’60s. My dissertation research revealed writers doing similar work in the period from 1890-1910, which made me think ‘New Journalism’ was too restricted for this form. I felt Literary Journalism accurately described what these writers, then and now, were doing. All of them were journalists and all had a literary bent. I didn’t have a grand scheme in mind. I just wanted to demonstrate that Literary Journalism was alive and kicking and I thought I could introduce [people to] this contemporary form with an anthology.” 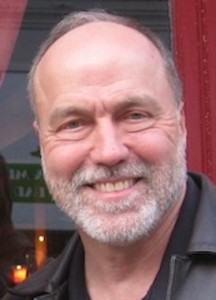 “I knew a few writers, such as Tracy Kidder and Mark Kramer, who lived near me in western Massachusetts. I interviewed them and other writers such as Richard Rhodes, John McPhee, Sara Davidson, Richard West and Mark Singer, among others. When I talked with editors, I described the form and asked if any of their writers practiced it. Eventually, my interviews and research led to the pieces that were included in the book, and to the introduction. It needed a history, too, and more than 20 years later scholars like John Hartsock and me took a crack at it. The members of the IALJS are continuing that research today.”

I asked Norm if he remembered the response to The Literary Journalists after it was published.

“Oh, yes, and it surprised me. I heard from a number of writers who said I had given a name to what they did, and I had outlined a community of writers who were doing similar things but were not necessarily aware of each other. After it was published, professors started teaching it. But the responses that astonished me came from newspaper reporters. Only a couple of the pieces in the anthology had been published in newspapers, because reporters had neither the time nor the space to pursue literary journalism. But I had forgotten that most newspaper reporters get into that business because they want to be writers.  They told me about dog-eared copies of the book in newsrooms, and about trying to emulate what some of the writers in the book did. Instead of dreaming about writing the great American novel, they dreamed about getting a job at Esquire or The New Yorker.

“One of my favorite responses came a couple years ago from Susan Orlean at The New Yorker. In a Twitter feed  (https://twitter.com/susanorlean/status/404039837826551808), she showed a picture of the book cover and said, ‘I can’t work unless I have a copy of this book next to me.’ The book has aged well.”