Thinking About the Ampersand 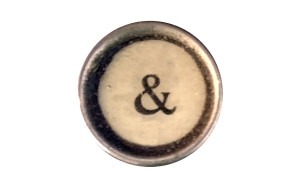 At one time the 27th letter of the alphabet, the ampersand means “and.” That made it awkward for English-speaking schoolchildren, who would have to recite “…W, X, Y, Z, and and.” So for years, per se (by itself) was inserted and schoolkids would recite: “…W, X, Y, Z, and per se and.” (In fact, per se was also used with letters that doubled as stand-alone words: A and I, as well as O once upon a time). The logotype “&” was designed by crafty Romans, who combined the “e” and “t” of the Latin word for “and” (et). Gradually and per se and became slurred together into “ampersand,” a word that first appeared in dictionaries around 1837. (Incidentally, when a word evolves from a mistaken pronunciation, like “ampersand,” it’s called a mondegreen.) 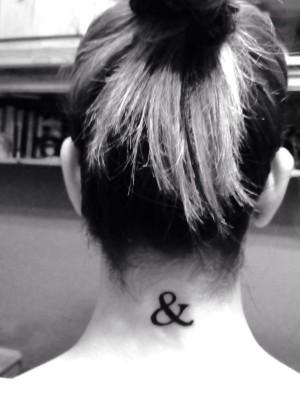 Of course, we see it in brand names like Proctor & Gamble, Johnson & Johnson, Smith & Wesson, Simon & Schuster, AT&T, Black & Decker, Abercrombie & Fitch and Dolce & Gabbana. And it’s used for citations in academic writing and in HTML coding to signal special characters and symbols. (For a copyright symbol (©), the HTML code “&copy;” signals it.)

In a poem called “Ampersand,” the poet (and University of Toronto English prof) John Reibetanz wrote:

the plump, open armed ‘&’ waving goodbye
from the end of the old-world alphabet
like an innkeeper framed in doorway candlelight,
farewells swelled with hopes of come again.

I use it in in emails, tweets and for Facebook posts, because it uses less space. But I also love the graceful look of the symbol. It would make a great tattoo [see the woman to the right] and I’d love to have the ampersand below, from a vintage marquee. 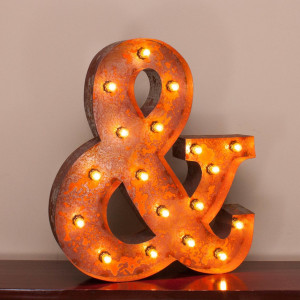