The Challenge of a Chinese Typewriter

Creating a typewriter in China was a challenge, since the Chinese language is not based on a simple Latin alphabet, like ours. Instead, each word is an individual symbol and there are thousands of symbols. The MingKwai (“clear” and “quick”) wasn’t the first Chinese typewriter: it was preceded by ones developed in 1898, 1915, 1919 and 1935. But these machines required memorizing the position of 5,000 characters and filling in missing words by hand. As recently as 25 years ago, Chinese publishers hired teams of people to select type from thousands of characters. 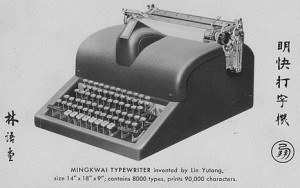 Dr. Lin Yutang, a respected writer, translator and inventor, had a dream. An ex-pat living in the U.S. since 1935, he filed a patent, issued in 1952, for the MingKwai, an electromechanical typewriter. He had a prototype made which he hoped would help modernize China. The keyboard has 72 keys: 36 representing the top, and 28 the bottom, sections of Chinese characters as well as eight printing keys. To select a letter, you press two keys together, each of which chooses from a bank of images representing the top (or bottom) of a character. (A “magic eye” is a magnifier which shows a preview of the letter to the typist.) The printing mechanism consists of six cylinders, each having six type rollers that contain 7,000 complete characters and over 1,400 components. The machine can, in theory, prouce 90,000 words by typing combinations, such as “sun” + “moon” (which means “clear”). 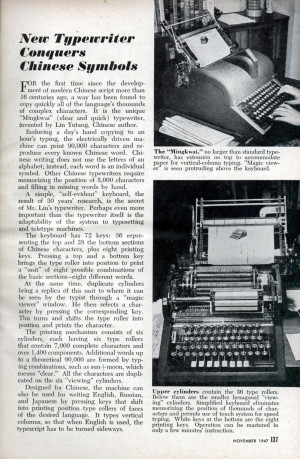 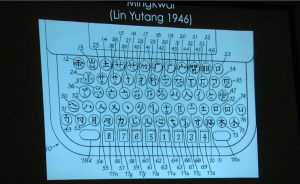 Sadly, his invention didn’t take off right away and was never produced commercially. Lin went deeply into debt, eventually moving to Paris to work for UNESCO. By the time of his death in 1976, aspects of his innovative invention had been incorporated into IBM’s Chinese-English translation machine and today Chinese computers use a system based in part on Lin’s input technology.