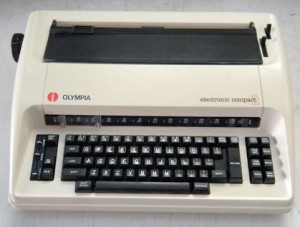 In 1983, faced with writing my first book, I decided to replace my manual Underwood typewriter with an IBM Selectric, the iconic classic electric model of the era. Then I discovered a new electronic model, the Olympia Report Electronic. It had a relatively feather touch, although it was far from feather-weight (imagine eight or ten laptops) and, best of all, it had an intriguing correction feature (a built-in lift-off tape: hit the correction “back-space” key and a primitive memory automatically lifted off 21 characters or to the end of the line, whichever came first). It was still pretty hand’s-on: you physically changed the ribbon; you turned the platen to put in, or take out, a sheet of paper, but I found I could type much faster on it without the keys sticking. (It’s hard for anyone under the age of 40 to imagine what a joy this was at a time when only early-adopters  had computer keyboards).

At the turn of the 20th century, European General Electric, a German company, founded Olympia to create typewriters to compete with American ones. After a rough period during World War II, Olympia became known as an innovative firm that made modern streamlined classics, especially from roughly the 1950s to the ’80s, when they were sometimes called the “Mercedes-Benz of typewriters.” (They had an impact on culture, too. Have you seen Marnie, Alfred Hitchcock’s 1964 thriller? Actress Tippi Hedren plays a disturbed secretary madly typing on an Olympia SG3 while having neurotic breakdowns.) Alas, Olympia wouldn’t survive the computer age: it closed in 1992. 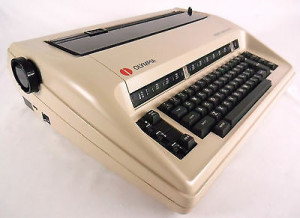