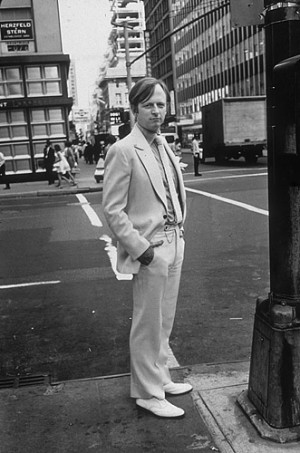 The birth of what Tom Wolfe called “The New Journalism,” according to the manifesto he wrote in 1972 as an introduction to an anthology with that title, can be dated to Gay Talese’s profile of retired boxer Joe Louis published in Esquire in the fall of 1962. Wolfe isolated this passage as an example:

“Hi, sweetheart!” Joe Louis called to his wife, spotting her waiting for him at the Los Angeles airport.
She smiled, walked toward him, and was about to stretch up on her toes and kiss him—but suddenly stopped.
“Joe,” she said, “where’s your tie?”
“‘Aw, sweetie,” he said, shrugging, “I stayed out all night in New York and didn’t have time—”
“‘All night!” she cut in. “When you’re out here all you do is sleep, sleep, sleep.”
“‘Sweetie,” Joe Louis said, with a tired grin, “I’m an ole man.”
“‘Yes,” she agreed, “but when you go to New York you try to be young again. “

Talese didn’t buy it. In an introduction to his 2010 anthology,  The Silent Season of a Hero: The Sports Writing of Gay Talese, he said that for years before 1962 he had been trying to integrate the devices of fiction — scene-setting, characterization, dialogue — into his nonfiction. Early influences included the short stories of John O’Hara, Irwin Shaw, Hemingway, Fitzgerald and Carson McCullers. (I once read carefully through a collection of John O’Hara’s short stories and found a scene in one that appeared to have inspired Talese when he depicted a moment in the home of Joe Louis’ second wife as she waxed almost orgasmically while watching film footage of one of Louis’ famous fights.)

The point that Wolfe was making, though, was that a group of feature writers in the mid-’60s — in addition to Wolfe and Talese, they included writers as diverse as Hunter S. Thompson, Joan Didion, Michael Herr, Jimmy Breslin, Nora Ephron and Truman Capote — figured out that traditional news reporting couldn’t document the social and cultural upheaval of the era. What would work? A more subjective, interpretive kind of reporting and writing where writers often included themselves in their stories. 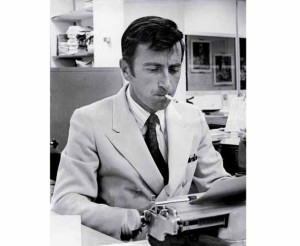 Gay Talese at typewriter, circa 1972

Talese has talked about the origin of his reporting and interviewing techniques, the bedrock of his fiction-like style: his mother’s dress shop in New Jersey.

“The shop was a kind of talk show that flowed around the engaging manner and well-timed questions of my mother; and as a boy not much taller than the counters behind which I used to pause and eavesdrop, I learned much that would be useful to me years later when I began interviewing people for articles and books.

“I learned to listen with patience and care, and never to interrupt even when people were having great difficulty explaining themselves, for during such halting and imprecise moments (as the listening skills of my patient mother taught me) people are very revealing. What they hesitate to talk about can tell much about them.”