Monkeying Around with Typewriters

Many of you will remember the episode of The Simpsons when Mr. Burns gives Homer a tour of his mansion and shows him a thousand monkeys typing on a thousand typewriters which, he claims, will soon produce “the greatest novel known to mankind.” When he checks one monkey’s progress, he says: “‘It was the best of times, it was the blurst of times?’ You stupid monkey!” 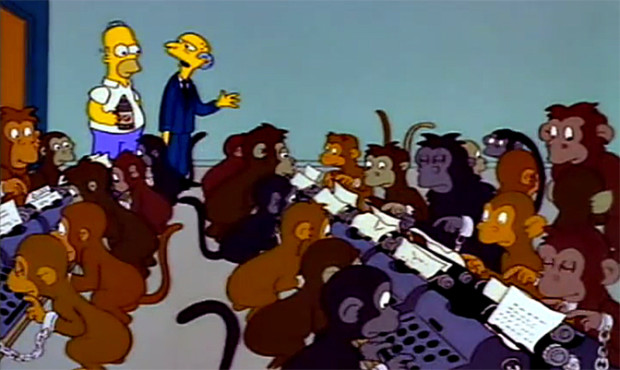 “This is a thousand monkeys working at a thousand typewriters. Soon they’ll have written the greatest novel known to man.”

We’ve all heard that old saying: if enough monkeys hunted & pecked at typewriters for long enough, they could eventually write the complete works of Shakespeare. But in 1979, Dr. William R. Bennett Jr., a physics prof at Yale University who specialized in designing computer programs to solve offbeat scientific and engineering problems, created a program to simulate the hypothetical monkeys. His conclusion: it would take some time.
According to his calculations, if a trillion monkeys typed ten randomly chosen characters a second it would take, on average, more than a trillion times as long as the universe has been in existence just to produce the sentence: “To be or not to be, that is the question.”

However, he also found that with the use of a very simple set of rules based on the frequency with which letter combinations occur in a given language, a computer programmed to simulate the imaginary monkey can generate in minutes some intelligible, if not Shakespearean, phrases containing strings of real words. Bennett played around with the experiment for a while and eventually a hypothetical monkey wrote the first sentence that vaguely (okay, very vaguely) produced something that approached that line from Hamlet: 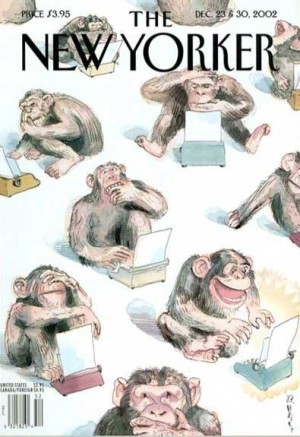 The classic monkeys-at-typewriters-cover of The New Yorker, by Barry Blitt.

TO DEA NOW NAT TO BE WILL AND THEM BE DOES DOESORNS CAI AWROUTROULD.

It didn’t end there. In 2003, lecturers and students from the University of Plymouth’s MediaLab Arts program used a £2,000 grant from the Arts Council for England to study the literary output of real monkeys. For thirty days they left a computer keyboard in the enclosure of six Celebes crested macaques in the Paignton Zoo in Devon, England. Not only did the monkeys produce only five pages, mainly consisting of the letter “S,” but the alpha male bashed the keyboard with a stone and all of the monkeys urinated and defecated on it. (From time to time, many writers have felt like doing this.)

Though this be madness, yet there is method in’t. 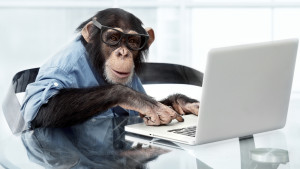 For the record, this is a chimpanzee, not a monkey. In case you thought I didn’t know that.