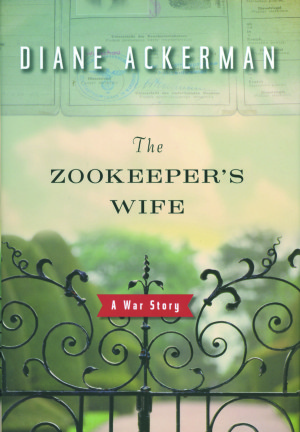 When my literary agent suggested I read Diane Ackerman’s The Zookeeper’s Wife: A War Story, I was surprised I hadn’t heard of it. I’ve re-read Ackerman’s The Moon by Whale Light, A Natural History of the Senses, and The Rarest of the Rare; I think of her as a superb creative nonfiction writer with a special interest in nature. But somehow this one slipped past me until recently.

In the mid-1930s, when the book begins, Antonina Zabinski and her husband, Jan, run the respected zoo in Warsaw. Taking what we would today call a modern approach, many of the animals are housed in habitats similar to their natural ones and the couple, especially Antonina, have an almost spiritual connection to animals. When the Nazis invade Poland, the zoo is destroyed with the most exotic animals carted away to German collections and the rest slaughtered. “How many humans will die like this in the coming months,” Antonina writes in her diary.

Drawing heavily on Antonina’s writings and other records, Ackerman is able to render an incredible depth of detail in this reconstruction. When the Nazis bomb Warsaw in 1939, she describes the destruction of the zoo:

With the zoo reduced to a pig farm supplying the Nazis, Antonina stays in their house with the family while Jan is active in the Polish resistance, smuggling Jews out of the Warsaw Ghetto and concealing them in hideaways inside the house and in various sheds and underground tunnels that had been part of the zoo. Antonina, who calls them “shipwrecked souls,” names each of them after an animal — a code so they can be warned if Nazis arrive — and cares for them. It is a hugely dangerous endeavour for both of them, esp since Ackerman spares none of the brutal details of the treatment of Jews at the hands of the Nazis and the fate that anyone active against the occupation will face. Like most World War II accounts, this one is filled with the horrors, sacrifice and courage necessary to survive during the Nazi era. Still, the story is not without lightness. much of it involving the couple’s young son and the way Antonina keeps pets — including a badger, chimpanzee, wolf cub, muskrat, chicken and rabbit — in part to entertain her family and their “guests,” but as much because Antonina’s affinity for animals, as well as people, runs so deep.