You Say Pilcrow, I say Para… 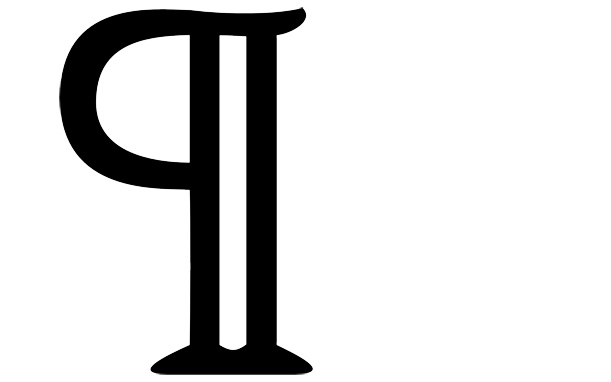 d, Marco Ursi, asked on Facebook about teaching his fifth graders about paragraphs. That made me think of the paragraph symbol, which I knew had a name but couldn’t remember what it was. So I consulted my copy of software engineer and writer Keith Houston’s book, Shady Characters: The Secret Life of Punctuation, Symbols & Other Typographical Marks. Man, the para symbol, aka the “pilcrow,” has too long and complex a history for a blog post like this, but the “pilcrow” started out Greek (paragraphos — para means “beside” and graphein means “to write”) and eventually evolved into the Middle English word, pylcrafte and, finally, “pilcrow.” No one seems to know why it looks like a backwards P with two downward strokes but Houston writes that it’s “intertwined with the evolution of modern writing.”

If, around say the 9th century BC, Homer had been proofreading the manuscript of The Odyssey, the lines would have been running from left to right, then right to left, back and forth down the page, a nightmare since there was no punctuation at all. (It was mostly meant to be read aloud.) It would look something like this:

Roman inscriptional capitals on the base of Trajan’s Column, 113 AD

The librarian, Aristophanes, devised early punctuation in the 3rd century BC. (basically today’s period, comma and colon), which helped, but then the Romans conquered the Greeks and, despite being a sophisticated civilization that laid the groundwork for modern politics, law and society, for the Romans punctuation wasn’t a priority.  But finally, by around the 2nd century AD, paragraphs were being flagged using one symbol or another, one of which was K (for kaput, Latin for “head”) which evolved into the pilcrow.  What drove the change was religion: Christianity relied more on written texts and as it spread, so did what would become recognizable as today’s writing, punctuation and typography. Paragraphs didn’t actually break at first, but at least the pilcrow let readers see where they were:

Once the printing press had been invented and demand grew for printed texts, who had time to ink in all those ornamental pilcrows? Besides, an indent to a paragraph symbolized the same thing. Or, as in the case of most things online, a nice space between paragraphs. 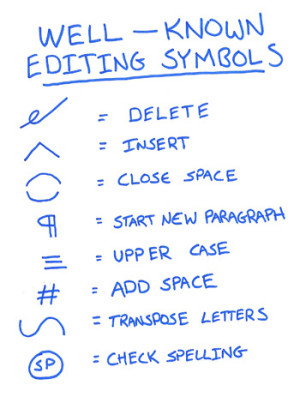 Today editors seldom work on paper (see well-known editing symbols on the left) so aren’t scribbling the pilcrow on manuscripts and for most of us it resides invisibly in the deepest background of Word. Although you can go to the Home tab, paragraph section & click on the pilcrow symbol (which is for show/hide symbols).

There is more, much more, in Houston’s Shady Characters: The Secret Life of Punctuation, Symbols & Other Typographical Marks, a book every self-respecting word geek should own.