I’m a huge fan of the Longform podcast, those hour-long interviews with many of the best nonfiction writers in America. Recently I listened to one with the award-winning journalist Alex Kotlowitz, who many will know from his features in The New Yorker (“The Trenchcoat Robbers” is a classic), The Atlantic or The New York Times Magazine; his frequent pieces on Ira Glass’ This American Life; or his remarkable books. (His bestseller, There Are No Children Here: The Story of Two Boys Growing Up in the Other America, is stunning immersion journalism.)

Kotlowitz is modest and engaging, like a mildly nebbish friend in a Woody Allen movie. He favors writing about outsiders — he says he’s always felt like one himself — and those who are marginalized in modern America. 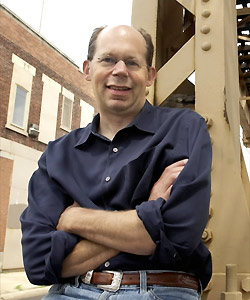 At one point, Longform co-founder and co-host, Evan Ratliff, asked Kotlowitz if there was a seminal book that influenced him when he was a young journalist and he replied, J. Anthony Lukas’ Common Ground: A Turbulent Decade in the Lives of Three American Families. That’s a book I also read as a young journalist in the mid-’80s and, like Kotlowitz, was impressed by how it was nonfiction that read like fiction.

Kotlowitz’s work reads the same way. He takes readers inside worlds to which they would otherwise not have access. Here’s a scene from There Are No Children Here, the story of two boys growing up in one of Chicago’s public housing complexes:

Nine-year-old Pharoah Rivers stumbled to his knees. “Give me your hand,” ordered his older brother, Lafeyette, who was almost twelve. “Give me your hand.” Pharoah reached upward and grabbed hold of his brother’s slender fingers, which guided him up a slippery, narrow trail of dirt and brush.

“C’mon, man,” Lafeyette urged, as his stick-thin body whirled around with a sense of urgency. “Let’s go.” He paused to watch Pharoah struggle through a thicket of vines. “Man, you slow.” He had little patience for the smaller boy’s clumsiness. Their friends had already reached the top of the railroad overpass.

It was a warm Saturday afternoon in early June, and this was the children’s first visit to these railroad tracks. The trains passed by at roof level above a corridor of small factories on the city’s near west side. To reach the tracks, the children had to scale a steep mound of earth shoved against one side of the aging concrete viaduct. Bushes and small trees grew in the soil alongside the tracks; in some places the brush was ten to fifteen feet thick.

Pharoah clambered to the top, moving quickly to please his brother, so quickly that he scraped his knee on the crumbling cement. As he stood to test his bruised leg, his head turned from west to east, following the railroad tracks, five in all, leading from the western suburbs to Chicago’s downtown. His wide eyes and his buck teeth, which had earned him the sobriquet Beaver and kept his lips pushed apart, made him seem in awe of the world…

At one point in the Longform interview, Kotlowitz talks about the feelings of insecurity that haunt even the most accomplished writers. “I’ve been at this now for almost 40 years and still the hardest thing for me is that…proverbial first knock on the door to get people. I’m working on a book now and I’m trying to chase down some people and those phone calls are really hard for me to make. I’m just afraid people are just going to say no, going to turn me down…”

Ratliff obviously thought exactly what I did because this was his reaction: “I’ve interviewed enough writers now to know that this is a phenomenon that I’ve definitely experienced personally, and that many writers have experienced personally, but I feel like you saying it establishes that it absolutely goes all the way to the top.”

Most writers I know would agree. The insecurities don’t disappear; with experience we just learn to manage them.