BOOKS THAT MATTER: “The Soul of a New Machine” 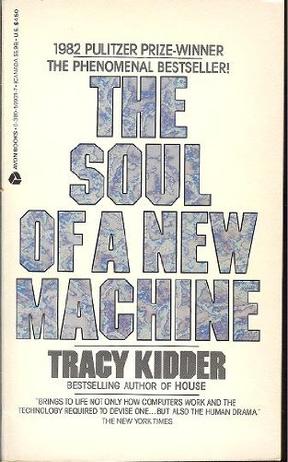 Wired Magazine called it “the original nerd epic.” It displayed author Tracy Kidder’s gift for explaining technology to a general reader without being dismissed as simplistic (or, worse, wrong) by gearheads. It launched Tracy Kidder’s career and won a Pulitzer Prize and a National Book Award. Although The Soul of a New Machine chronicled cutting edge technology when it was published in 1981, today it’s a history book.

From the mid-’60s until the late ’80s, minicomputers were a leading industry sector, led by Digital Equipment Corporation (DEC) and its VAX machine. Minicomputers were a cost-efficient way for businesses to computerize without buying huge and costly mainframes from IBM. (The industry began dying in the ’90s with the introduction of microprocessor-based PCs and workstations.) The Soul of a New Machine is the story of a team of designers at a small, upstart firm, Data General, developing its first 32-bit minicomputer, the Eclipse MV/8000, code-named “Eagle.”

As Kidder conceived it, the book is a classic “quest” — complete with heroes battling obstacles on a tight timeline. As though referencing Odysseus, the book begins with Data General’s hard-driving general manager, Tom West, on board his sailboat during a stomach-churning storm. West is known as “the prince of darkness” by employees, not surprisingly given his theories on the work. In the rush to complete the job, West says, “Not everything worth doing is worth doing well” and “if you can do a quick-and-dirty job and it works, do it.”

The team Kidder is following are disassembling and studying the VAX. In one scene that illustrates Kidder’s mastery of the art of simplification, he wrote:

“West spent the morning removing the VAX’s twenty-seven printed circuit boards. He’d take one out, study it, make a few notes, and then put it back. These boards were flat plates, each about the size of a shirt cardboard. In regular columns across their surfaces lay small rectangular boxes. Each of these boxes enclosed an integrated circuit, or “chip”; if bared and examined under a microscope, the chips would look like mazes — imagine the wiring diagram of an office building inscribed on a fingernail. It’s possible to get inside the chips, inside the littlest boxes inside the boxes that constitute the central works of a modern computer, and, bringing back the details, to create a functionally equivalent copy of a machine. ‘Reverse engineering’ is the name for that art, and it takes time and equipment. West called such engineering ‘knock-off copy work.'”

The team of engineers working for West are young and obsessed, for whom the early tech world is like a drug. In one section, after explaining Boolean algebra in surprisingly clear, layman’s language, Kidder returns to the human dynamics, illustrated by one of the team: “That was what made it fun; he could actually touch the machine and make it obey him. ‘I’d run a little program and when it worked, I’d get a little high, and then I’d do another. It was neat. I loved writing programs. I could control the machine. I could make it express my own thoughts. It was an expansion of the mind to have a computer.'”

Kidder’s book is dated in many ways, but it’s a vivid, beautifully crafted window into the tech world before smartphones put into our pockets computers far more powerful than anything Tom West imagined in the early ’80s.