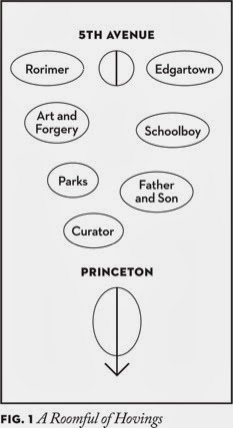 When I began my career as a feature writer, I soon learned that one of the biggest challenges is structuring a longform piece. It has many parts and if any of them are out-of-place the whole thing becomes unsound. (To readers, that means confused enough to make them stop reading.) That’s why I spend two full classes (three hours each) looking at structure when I teach Advanced Feature Writing at Ryerson University.

Ted Conover, a master of creative nonfiction, has said he used to write and write until a structure emerged. Then one day he realized that this approach is inherently inefficient. Structure needs to be planned in advance in much the way blueprints are drawn up before a house or office tower is built. Take a look at John McPhee’s structural plan for “A Roomful of Hovings” [right], his classic profile of former Metropolitan Museum director Thomas P. F. Hoving. In his recent book on writing, Draft No. 4, McPhee mentioned a Sunday morning when he walked with Hoving through the museum, lingering in a room containing a couple of dozen portraits. Later, he decided that Hoving’s story would best lend itself structurally to being like that room, with a series of discrete portraits, “each distinct from the others and thematic in character.” 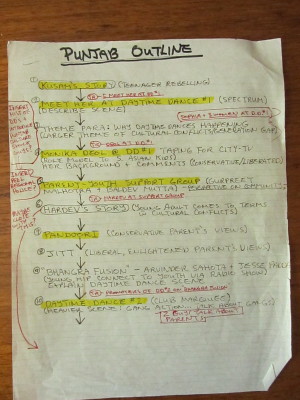 For a feature I wrote for Toronto Life in the ’90s, I was looking at a cultural phenomenon — daytime dances in the city’s South Asian community. It was organized thematically and didn’t revolve around a profile of one individual. I built the story [left] around scenes — attending daytime dances; meeting a conservative parent who thought dances were an example of the sloppy morality of the West; sitting in on a workshop led by a social worker to help South Asian teenagers handle their struggle between their protective parents and their efforts to fit into the world around them; and so on. Had I tried to just muddle my way through this 6,000-word feature without a plan, the result would not have been pretty.

Jon Mooallen’s 2013 New York Times Magazine feature, “Who Would Kill a Monk Seal?,” explores an issue: monk seals, long endangered, had returned to Hawaii but a number of them had been found slaughtered, reflecting a tension between environmental preservationists and local Hawaiians. The two sides of the debate are presented by following Mooallen’s journey [below], a common storytelling technique. 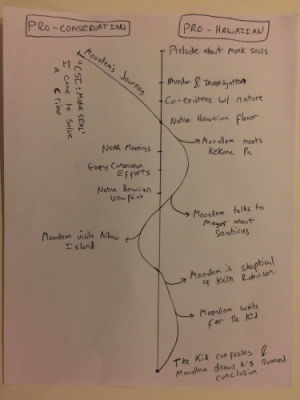