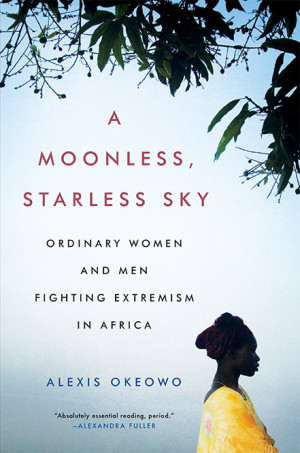 Alexis Okeowo’s recent book, A Moonless, Starless Sky: Ordinary Women and Men Fighting Extremism in Africa, grew out of reporting she was doing on the kidnapping of more than 300 girls in northeastern Nigeria by terrorist group, Boko Haram. She had found a vigilante who abandoned the organization and a schoolgirl who had escaped, and was trying to understand how they had survived and took risks that could have cost them their lives. She realized there was a book in documenting the reality of ordinary Africans fighting the extremism sweeping the continent. The result is a powerful tribute to courage and the human spirit.

The child of Nigerian parents, Okeowo grew up in Alabama & graduated from Princeton in 2006.  She spent much of the past decade in Africa reporting for various publications, including The New Yorker. From a short bio about her in that magazine: “Alexis Okeowo, who was named a staff writer in late 2015, is continuing the tradition of the foreign correspondent who takes considerable personal risk driven by the conviction that all stories deserve to be told, particularly those that require a great deal of courage to uncover in the first place.”

The book, Okeowo’s first, is divided into four narratives, each a window into struggles facing Africans today. As she told NPR:  “I realized over the years reporting in Africa that my reporting was starting to follow a pattern. I was seeking out people who found themselves, suddenly, in extreme situations. And I was interested in what kind of choices they made, and how they rose to the occasion, and how they tried to preserve their ways of life amid circumstances that were extraordinary.”

In Uganda, Eunice, a teenager kidnapped by Joseph Kony’s Lord’s vicious Resistance Army (LRA) and forced into marriage with Bosco, one of the militia’s child soldiers, escapes at great personal risk. Then she faces the challenge of being accepted into her local community again. When Bosco also escapes and joins her, there is an added issue: their marriage took place under the threat of violence and  is not easy to maintain. Family members and neighbors can’t understand why she would stay with a man who took her against her will and raped her. But nothing is simple. Eunice tells Okeowo that she can’t imagine living with someone who hadn’t shared her experience. “He took care of me when I was in the bush. That’s why I came back safely.” 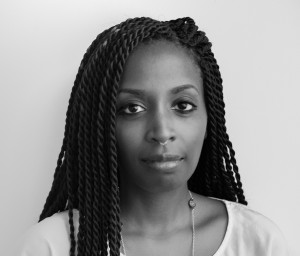 In Nigeria, Mohammed Yusuf’s extremist group, Boko Haram, responsible for bombings, assassinations and the abduction of schoolgirls, is intent on overthrowing the government to create an Islamic state. In this section, Okeowo weaves together two stories — that of Abba Aji Kalli, an anti-Boko Haram activist nicknamed Elder, and Rebecca Ishaku, a schoolgirl kidnapped by Boko Haram who managed to jump off one of the trucks, a convoy taking more than 300 girls into the bush, and returned to her family. Elder is a complicated character, a hero in one sense and yet he evades Okeowo’s questions about human rights abuses perpetrated by his own organization. When Okeowo met Rebecca, she was 21 and reading Shakespeare. “Rebecca couldn’t get rid of the feeling that the militants would come to Abuja to take her again. Her hand still ached from the jump that night. But she was doing what she had to do now, too. She had graduated from high school and was going to apply to university. ‘God gave me the opportunity to think about my future, so I can’t let them stop me from going back to school.’ She gave her head a final shake, and smiled. She had made up her mind.”

In Mauritania, the last country in the world to outlaw slavery, Okeowo follows the work of Biram Dah Adbeid, a former court clerk who rose to national prominence as an anti-slavery activist. She has a gift for explaining the complexities of African culture and politics in clear, strong prose: “It was true that slaves could technically tell their masters they wished to be free, but slave owners used physical abuse and death threats to keep them enslaved. Nothing belonged to you and yet you belonged to everyone, anyone who had lighter skin and White Moor blood and more education, more money, more things. Everything good was before you, around you, and you were not allowed to touch it, or to desire it, and better to not even think of it. And then there was the biggest hurdle to freedom: defying religious teachings and societal pressure in order to believe that you could be free. How could you think you would be the one, amid the wreckage of the destroyed people you knew and loved, to leave your bondage behind?”

Perhaps the most remarkable section takes place in Somalia, where Okeowo documents the story of Aisha, who endures threats and physical violence to play competitive basketball. Sports are forbidden by Al-Shabaab, the Islamist militant group controlling many rural areas of the country, yet Aisha, whose hero is NBA star LeBron James, and her teammates risk injury or death pursuing a passion that inspires them in a society that provides little inspiration for anyone. Okeowo’s description of Aisha’s world is chilling: “And so there were always eyes watching you as you made your way through the city, even if you didn’t know they were looking. The eyes could be friendly, willing to offer a hand if a suicide car bombing suddenly went off. Or they could be hostile, ready to report you to people unknown. In Somalia, the difference was a matter of life and death.”

As Okeowo writes in her preface, “Feeling neither wholly American nor African, I had come to see myself as an outsider in both places, an observer at the fringes. It was a perspective that helped me learn to report with clarity.” The title, A Moonless, Starless Sky, makes the book sound bleak. But resisting easy conclusions, Okeowo presents these noble stories in a prose that is always perceptive, discerning and compassionate.