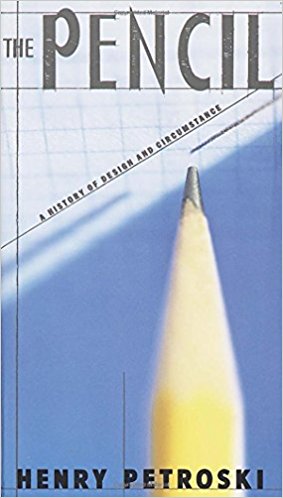 What is a pencil? Henry Petroski, the engineer and author of the wonderful 1990 book, The Pencil: A History of Design and Circumstance, describes it as “the ephemeral medium of thinkers, planners, drafters; the medium to be erased, revised, smudged, obliterated, lost or inked over.” Yes, all true, and there is something romantic about them, certainly viewed from 2018.

Sitting at my desk I can see, sticking up from 4 large mugs, amidst a field of pens of every kind, color, and size, a CW Pencil Enterprise model (purchased at CW’s lovingly curated shop on the Lower East Side of New York), a Pantone Universe graphite pencil, a Palomino Blackwing with the glued ferrule holding a flat eraser, and several short, eraserless pencils that came with beautiful writing paper from a shop in Paris (a gift from a close friend).  Oh, and Pentel, Bic, and Zebra mechanical pencils, as well.

How often do I use them? Not that often but I would never be without them.

I read Petroski’s book in the early ’90s, shortly after it was published. He saw the pencil as among the most important inventions in the history of ideas but focuses on how it, like everything from the wheel to a Tesla’s engine, has been engineered by someone. He opens with naturalist and philosopher Henry David Thoreau who, despite working in his father’s pencil factory, cataloged everything he brought with him on his trips to Walden Pond except the instrument with which he wrote his journals. “Perhaps the very object with which he may have been drafting his list was too close to him,” wrote Petroski. “Too familiar a part of his own everyday outfit, too integral a part of his livelihood, too common a thing for him to think to mention.”

Petroski also traces the period, in the mid-1500s, when a mineral, later called graphite but at the time thought to be a form of black lead, was discovered. (Locals first used it to mark sheep.)  That’s why we refer to a pencil’s “lead,” even though graphite has been used, not lead, for a few centuries.)  And he tells the story of a U.S. entrepreneur and inventor who, in 1858, developed a way to attach an eraser to the end of a pencil. If you want to know why the standard color of pencils is yellow, you’ll have to read the book.

Today there are an estimated 15-20 billion pencils made each year, about half of them in China.  They’re inexpensive, durable, and plentiful, making them popular in schools, especially in poor countries. Still, sales of pencils in the West is flat or growing very slowly.

In a pre-computer era, I used pencils a lot. When editing student manscripts, for example, which I often did on streetcars and subways, I first carried a pencil and a small sharpener, later a mechanical pencil with extra leads. Today, I often use them to make notes in the margins of books I’m reading. But I admit I mainly just enjoy what they represent. As Petroski put it: “Ink is the cosmetic that ideas will wear when they go out in public. Graphite is their dirty truth.” 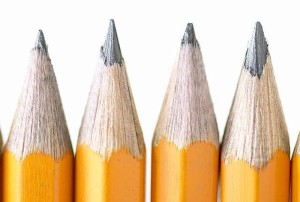