I’ve listened to every one of the more than 300 Longform podcasts, those interviews with nonfiction writers that the Longform site has been running for the past six years. More recently, a British variation, Always Take Notes (Always Take Notes podcast) has materialized. 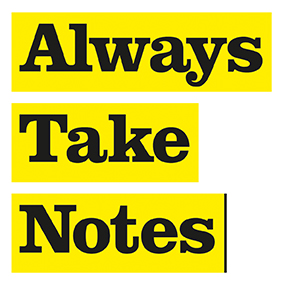 Co-hosts Simon Akam and Eleanor Halls (or Kassia St. Clair) have candid conversations with journalists, editors, publishers, novelists, and agents about their work and career paths. Editors explain what makes a great pitch and writers talk about pitching newspapers and magazines; publishers talk about how they find and develop great books and literary agents reveal how they negotiate the best deal for their writers. Each interview begins with the guest being asked how she or he got into the business and unfolds from there.

For writers and editors, this kind of stuff is addictive.