They Will Have to Die: Verini’s reporting straddles the polarities of war with evolution of technology

‘I would find out later that the strike request exchanges were taking place on a WhatsApp channel. Armies, air forces, an infinity of munitions, all orchestrated via a free chat application’

As Phillip Knightley wrote in The First Casualty, his excellent 1975 history of war reporting, before the Crimean War of the 1850s, British newspapers cribbed news of military conflicts from foreign papers or relied on junior officers to send them dispatches. These reports either never came or were next-to-useless since the officers would never criticize their own military and didn’t understand how “news” was defined. Then, The Times of London sent William Howard Russell to cover the war against the Russian Empire in the Balkans and Crimean Peninsula. The Times’ coverage, Knightley wrote, represented the first “organized effort to report a war to the civilian population at home using the services of a civilian reporter.” Russell’s coverage “was considerably closer the truth than anything the public had previously been permitted to learn.”

Since then, technology has been the biggest factor in the evolution of war reporting. A decade after the Crimean War, the telegraph was ubiquitous enough to allow the U.S. public to read reports of the Civil War a day or two after battles happened. (Reporters would ride horses to the nearest town, which usually had a telegraph, to transmit their stories to their editors.) When the First World War broke out in the early 20th century, newsreels from the front appeared in movie theatres and the laying of the trans-Atlantic telegraph cables meant daily news from Europe could reach the public in North America.

Two decades later, during the Second World War, radio reporters like U.S. star Edward R. Murrow and Canadian Matthew Halton produced reports from the field using the latest audio recorders and transmitters, while photographs could be transmitted via telephone lines for use the same day. By the late 1960s, the conflict in Vietnam became the first “living room war,” with nightly newscasts bringing horrific battleground scenes into North American homes. In the late 1990s, with the internet rapidly expanding, the war in Kosovo was covered by web-based reporters able to digitally dodge efforts by authorities to censor coverage. This was only a precursor to today, when smartphones — in the hands of everyone — are ubiquitous in conflict zones everywhere.

In James Verini’s new book, They Will Have to Die Now: Mosul and the Fall of the Caliphate, the writer accompanies an often motley, U.S.-backed counterterrorism force charged with driving ISIS out of Mosul, one of Iraq’s major urban centres (and acknowledged to be the war’s climax) where the jihadis were making their last stand. Spending extended periods of time there during 2016 and 2017, he describes “the sheer mystical velocity of 21st century mechanized-digitalized combat.” He writes: “I would find out later that the strike request exchanges were taking place on a WhatsApp channel. Armies, air forces, an infinity of munitions, and it was all being orchestrated via a free chat application you download to your phone in five seconds… It was farcical. It was ingenious. It was perhaps the single densest example of a technological current in the war I could only think to call occult.” 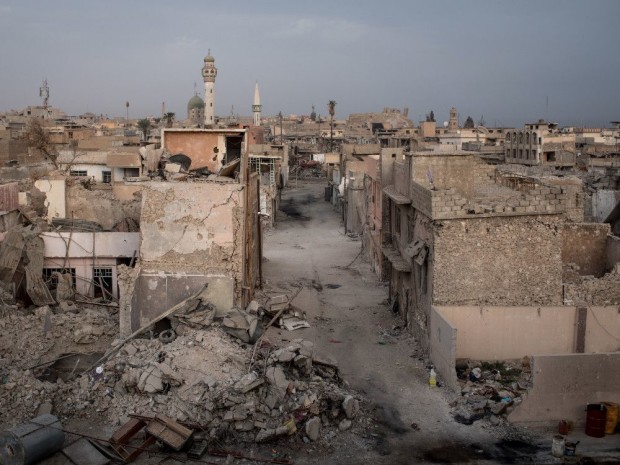 They Will Have to Die Now is the latest in a long list of powerful books — as opposed to collections of news reports — in which creative nonfiction writing meets war reportage. For example, George Orwell elevating the Spanish civil war to literature (Homage to Catalonia); John Hersey on the aftermath of the Atomic bombing of Japan (Hiroshima); the gonzo journalism of Michael Herr in Vietnam (Dispatches); Polish journalist Ryszard Kapuscinski’s daring, three-month journey into Angola in 1975 at the beginning of that nation’s bloody civil war (Another Day of Life); and many books documenting America’s involvement in the Middle East since the first Gulf War.

Some of these, like Evan Wright’s Generation Kill, try to out-gonzo Herr with first-person adrenalin. Others, like David Finkel’s The Good Soldier, calmly record events like a camera, adopting a detached, third-person stance.

They Will Have to Die Now straddles those polarities. Like Dexter Filkins’ The Forever War and Sebastian Junger’s War, Verini’s book is a personal, keenly observed, deftly written account of time spent with Iraqi and Kurdish forces. Mosul, he writes, is a “hellish cityscape, Bosch’s Last Judgment, with its fiery twilight tortures, comes inevitably to mind.” He describes Kurds who punctuate the time between firefights by taking group selfies like kids at a theme park and Shia soldiers who “looked as though they’d been kitted out at some urban unisex martial athleisure boutique. It was a sartorial riot of dozens of different patterns and shades of camouflage and denim and tactical gear and gym wear and footwear of every description, and they paid as much attention to their hair as any Prussian cavalry officer.”

One of many memorable, and complex, characters is Abu Fahad, a 50-year-old Sunni Muslim and former medic whose wife was killed at a checkpoint. Fahad was persecuted when Shia Muslims governed Mosul and was chased with his children from his home. When his son’s furniture-making business was no longer viable, the young man moved to another part of Mosul where he became sympathetic to the Islamic State but later told his father he’d renounced it. “Each day you receive a call,” Fahad tells Verini, “and you don’t know if it’s just a call or if someone is calling to tell you your brother’s died, or your uncle. We haven’t found comfort or peace in our entire lives. We’ve spent all our energy on misery.”

Another such character is the commander of the Counter Terrorism Service, General Adbulwahab al-Saadi. With a sniper firing from somewhere inside a mosque, he stood in the open, without a flak jacket or helmet, casually chatting to a family cowering inside their home as a bullet tore up a chunk of pavement at his feet. “He was tall, taciturn, exquisitely aloof, handsome in that universal military way — rectangular of skull, lantern of jaw, with a permanently folded brow and a perfectly greying curly flattop, as though a portraitist was overseeing his aging. Shelby Foote once described a Civil War general’s expression in photographs as looking as though ‘he were dictating terms for the camera’s surrender.’ That was Abdulwahab’s face every hour of every day except for when he slept, and then, too, for all I knew.”

Today, one thinks of war reportage in terms of visuals: Digital cameras and smartphones show the world bombs exploding and people attacking and retreating, living and dying. Even writers like Verini craft their books to be filled with scenes of battles, soldiers, otherwise ordinary people coping with the chaos. But, one of the most telling insights in They Will Have to Die Now is that the experience of war is not visual.

“Experientially, war is mainly sound,” Verini writes. “In the news, in a movie, you see a war, but once amid a war, you mostly hear it. You listen to projectiles all day and night, but only rarely do you watch them leave a muzzle and even more rarely do you see impact. You’re usually sitting in some house or truck or squatting behind some berm, listening to the destruction. War is loud. Loud and listless. Quite dull, in fact. The scenes you’ll read in this book make up a minuscule portion of the time I spent in Mosul. The rest of the time I spent waiting. War consists largely of waiting for war…”

When it comes, at its most graphic, Verini takes readers through a landscape of sniper fire, smouldering cars, rocket-propelled grenades (one nearly kills Verini), body parts, a grisly execution and exploding VBIEDs (vehicle-borne improvised explosive devices), often with the suicide-driver welded inside. But the book also contains detailed (occasionally overly-detailed) historical sections that take readers back to the fourth millennium B.C. and marches on through the Middle Ages, the fall of the Ottoman Empire, colonialism’s manipulation of the region all the way to 1991 and the First Gulf War, which then-Iraqi President Saddam Hussein renamed “The Mother of All Battles.”

Verini learned to listen closely when locals talked about the past four decades. They believed that the U.S. was backing both Iraq and the Islamic State. But the U.S. rebuilt and armed the Iraqi military, Verini thought, and sent its soldiers to fight beside them. What could America have to gain by spending billions to battle the Islamic State and also support it? Yes, the locals told him, that’s what makes America so brilliant, it controls both sides of every war, a logic that Verini finally comes to accept. “The longer and closer I listened,” he writes, “the more I saw the opposing strands had fused. Respect and suspicion were one, grievance and awe inseparable. Iraqis believed America was betraying them because that’s what a power worthy of reverence did.”

To understand that is to get considerably closer to a version of truth accepted in Iraq and rarely understood outside it. Beyond bringing the sights, sounds and characters of the battlegrounds to life for readers, this is what good war reporting is capable of: Bringing a haunting perspective to events we only thought we understood.