So glad that Gramercy Typewriter is still around. I visited the shop, on West 17th Street in Chelsea, a few years ago and it provides a lovely nostalgic feeling for those of us who, long ago, wrote on typewriters, not computers. According to Paul Schweitzer, owner of Gramercy Typewriter, which his father founded in 1932, there’s a renewed interest in typewriters. He says in the 2000s he sold about 10 vintage typewriters a month; today he’s selling 60 a month. Here’s a short video on Gramercy Typewriter. 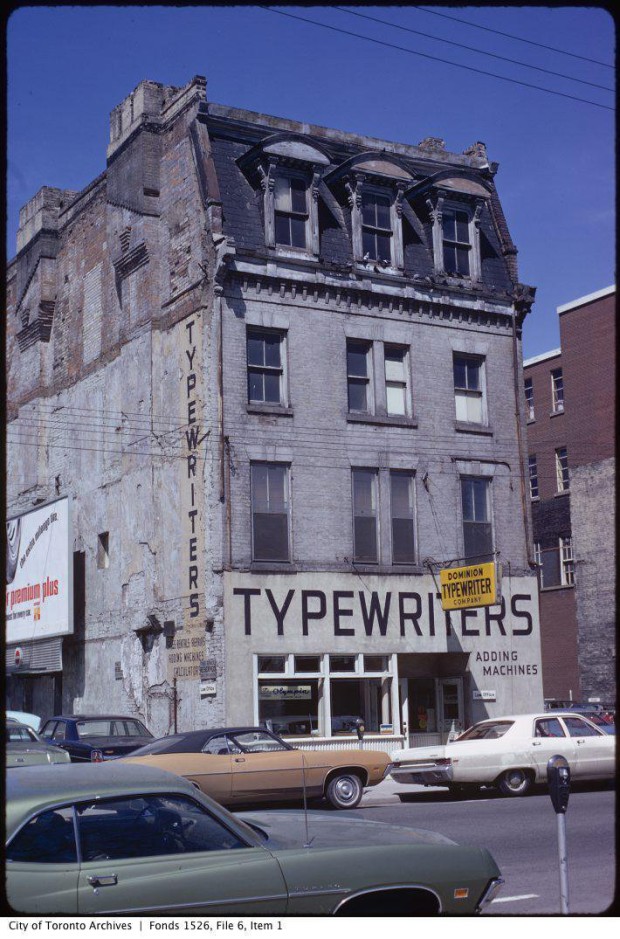 In the late ’70s  and early ’80s, until I bought that first IBM “clone,” I would take my typewriters to Dominion Typewriter at Adelaide & Jarvis. It was usually a simple mechanical fix.

From the Dominion Business Machines web site:
Dominion Business Machines originated as Dominion Typewriter,  a business that arose from the initiative of Telegraph Operator  J.J. Seitz who lived in Buffalo, New York. On a trip to New York City in the late 1890s, Seitz noticed the recently introduced Underwood Manual Typewriters and brought what were surely the first of these machines into Canada, to Toronto, about 1898.

He started The Underwood Typewriter Company of Canada, selling machines that were hailed as amazing labour-saving devices in much the same way as the Personal Computer was presented about eighty years later.

Seitz hired Charles Sanderson to sell and service these new machines, and sold him the repair department of the fledgling Underwood organization, a separate company franchised to handle other manufacturers. Established in 1902, this company was called The Dominion Typewriter Exchange.

In the years that followed the company was a sales leader for manufacturers such as Olympia, Olivetti, Remington, Smith Corona, Sharp, and of course, IBM.